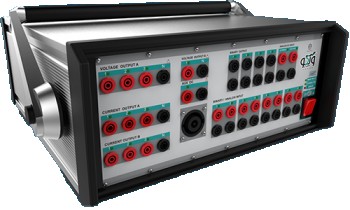 In 1994, Dr. Hossein Askarian Abyaneh (chairman of the Board of Directors and Professor at Amir Kabir University of Technology), decided to build a relay test device in consultantions with different professors abroad. Dr. Farzad Razavi (CEO of Vebko), a graduate, former PhD candidate of Dr. Askarian, also worked with him while being an undergraduate student, is also one of the founders of Vebko Company. Initially, the project was sponsored by Tehran Regional Electrical Company (TREC). The task was designed to provide hardware and software for those off-campus in contact with students. Dr. Askarian and Dr. Razavi acted as top supervisors; research and scientific materials were prepared with the help of Amir Kabir’s students who in turn took responsibilities of its production. The first device called CPRT was made in the same year, where Mr. Amiri and Mr. Karimi took the responsibility for hardware and software, respectively. The project took two years and resulted in a very large hardware, 0.5m×1m×2m, with a very low accuracy and weak software. After the mentioned version, in 2000, TREC signed a year and half contract with Amir Kabir University of Technology (AUT), working with the same technical team which lead to the production of CPRTP with two small items of luggage. Once again the precision of hardware was still low and weak; TREC purchased two CPRTPs. In 2004, TREC, Zanjan Regional Electrical Company (ZREC) and Esfahan Regional Electrical Company (EREC), each signed a contract and purchased a device in order to support Vebko. Mr. Barzegar and Mr. Sedaghat were responsible for the hardware and software of the device, respectively. This lead to a device called RENAISSANCE with common dimensions which had a very weak hardware and software accuracy and capabilities. In 2009, a one-year-contract was signed with the Semnan Regional Electrical Company (SREC). CPRT100 was manufactured with the same dimensions as the previous version with acceptable hardware accuracy, but very limited functionalities and many software problems. Mr. Farooghi and Mr. Kabirnya were responsible for the hardware and software, respectively. After releasing this version of the device, the team concluded that manufacturing a device at this level of technology would not work. The group under the supervision of Mr. Barzegar also announced that they would sell the device independently in Iran. Several devices were sold by them in Iran in which AUT, Dr. Askarian, and Dr. Razavi did not play any role. In 2010, the group concluded that it is possible to receive funding from various sources to re-design and manufacture the device. Finally, in 2013, a contract was signed with the Vice Presidency of Science and Technology for manufacturing a national relay tester and relay. The decision was to found a knowledge-intensive company to conduct all activities, including research, design, and manufacturing the device are within that company. First, Vebko decision was to manufacture several products, but after a short time, it turned out if the company focuses on two products, the quality of product would improve. This process started in 2013 and the first product called AMT105 was produced in October 2015 used and tested in Tehran Power Transmission Maintenance Engineering Company (METANIR) and Bakhtar Regional Electric Company (BREC) for the first six months. Two important decisions were made in 2016, when Vebko started selling to more clients: First decision was to create Telegram group so that everyone can give feedback. Vebko has used these comments to improve the device which led to adding more options. In January 2016, it was decided that any hardware problems must be reported on the website and Telegram group in a way that all users become aware of the problems and its solution. These two decisions helped Vebko to optimize the hardware and add software options. In October of 2015, the authorities in the Ministry of Petroleum were encouraged by contractors to use the device. In the beginning, due to the fact that the tester has a high technology and there were certain concerns in this regard, the authorities in the Ministry of Petroleum were reluctant to use this device, but at the end of 2015, AMT105 showed a good performance compared with foreign devices. It was finally approved by the authorities in different phases of Asaluyeh, and the company was able to enter the Vendor List of Ministry of Petroleum in November 2015. In January of 2015, a decision was made so that AMT105 can be used for various applications, in addition to testing relays, such as key testing, CT test, transformer testing, and so forth. Then, the related functions have been added to the device. To date, around 230 devices have been sold and used by electrical engineers all over the country.

Introducing the Company and Products